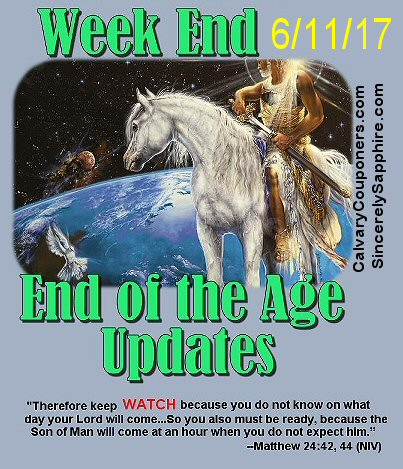 How are all of you this weekend?  I’m getting over a NASTY cold that had me down for over a week.  The cough is still waking me up at night but when sitting up it’s just an occasional nag. I hope you all are healthy today!  I’m playing catch up with all my online activities!  Speaking of….

(no prophecy videos this week)

For Israelis and Palestinians, a Football Match For Peace Is Like a Political Solution – Far-Fetched

Abbas Adviser: Western Wall can only remain under Muslim sovereignty

Nikki Haley at Yad Vashem: ‘We must always choose a side’

Liberman: Israel has no interest in conquering Gaza in ‘next war’

Qatar said to order several Hamas terror chiefs to get out

Beyond Raqqa, an Even Bigger Battle to Defeat ISIS and Control Syria Looms

U.S.-Led Forces Said to Have Used White Phosphorus in Syria

Anti-Muslim rallies across US denounced by civil rights groups

John Bolton: We have to start understanding radical Islam

What the UK election earthquake means for the world

Legal experts to Trump on travel ban: Twitter hurting cause

Sessions says he will discuss Comey with Senate panel

Bogoslof volcano in the Aleutian Islands erupts to 34,000ft