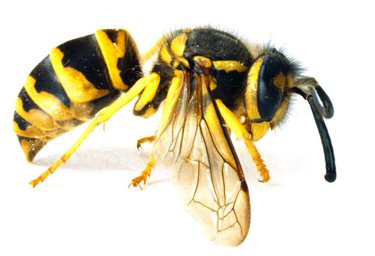 One just like this one is at the center of one of the worst days of my life to date.

On July 19th I was on our deck sweeping the leaves and debris away in preparation to assemble the new patio umbrella I’d gotten for my birthday 10 days earlier (it’s still not together). My 15 year old non-verbal autistic son, Evan, was inside and I could see him in the house on the other side of the sliding glass door that separated our kitchen from the deck.

In the corner of the deck there was a cover that usually goes over one of our patio chairs covered in leaves. I picked it up not knowing it contained a yellow jacket nest.

Yellow jackets swarmed me and one got in my ear!  I quickly went into panic mode and raced into the house and up the 7 stairs to the bathroom where the mirror was I was hoping would help me to see the nasty little creature to extract him from my ear.  The loud buzzing was disorienting me, besides the fear of the bee being in my ear to begin with. But this was just the beginning of the traumatic day for my family and I.

Once that crisis was over, I came back downstairs to find the sliding glass door open and my son was nowhere in sight! Triple panic mode quickly ensued as I searched the house franticly trying to find my baby boy, to no avail. I raced to the backyard (that is normally fenced in but my husband had left a portion of it laying on the ground while trying to get the mower inside) looking for him. I ran back into the house and threw my shoes on and raced out the front door and into the yard then up the street screaming my son’s name.  The neighbor boy came out and told me he saw him walking up the other street towards the busier street our street runs off from.

My husband was gone with our only running vehicle helping a friend and so I had to head off on foot. I went up the street the boy indicated screaming my son’s name and calling 911 at the same time (thankful now that I had the mind to grab my phone on the way out the door).  The dispatcher had to keep telling me to calm down because she couldn’t understand me.  You see that scenario on TV but you never really understand why the dispatcher can’t hear you until you are in that situation.

I hung up from the dispatcher screaming Evan’s name and praying intermittently.  Finally a police cruiser pulled up and a female officer had me get in the cruiser with her for us to try to find my son while another cruiser went searching as well.  I saw the other cruiser tearing off down the busy street and found out later he was on the way to get my son.  The Lord had the situation well under control, I would soon discover.  A Facebook friend of mine (who I don’t know offline, but a few offline friends know him) responded to my post about what had happened telling me that his wife had called the police after seeing Evan.  She had worked with special needs kids like my son in the past and recognized his needs.  So the other officer was flying up the road and around the corner  about a mile away to get Evan where she had seen him.

The other cruiser with my son inside met us in my driveway. I’ve never been so relieved in all my life.  (Evan was safe and sound save from sore feet from walking over a mile away in his socks with no shoes on)  He wound up near the fairground on a road that’s pretty busy. Thank God the drivers on the road at the time was on their toes.  I thanked the officers and God profusely for getting Evan home safely, and once I discovered my Facebook friend’s wife’s identity I friended her and thanked her profusely as well.

I cried most of the rest of the day and the next. My nerves were shot.

I went into a bad bad depression I’m really just now pulling out of.  I felt guilty for not making sure the door was closed and locked before heading up the stairs to get the bee out of my ear. I felt like a terrible mother. I felt like I didn’t deserve this sweet boy and I kept thinking what could have happened had things not worked out so well.  Evan is a very handsome young man. I kept thinking he could have been snatched up and sold into sex trafficking, he could have been grabbed by a pedophile, he could have been hit by car traveling too quickly up that street as many do.  On and on my mind raced.

I know (as so many people kept telling me) that I was in panic mode from the bee in my ear and can’t be blamed, but when it’s you it happens to, it’s a whole different story.  Any special needs mom will tell you that we blame ourselves for anything that happens to our kids and half the time “specialists” blame us for any number of things we may have done wrong during our pregnancies and their infancies as to why our kids are special needs to begin with.

Since then we have gotten window and door alarms, and we are waiting on my son’s state ID to come in the mail to be able to get a locator bracelet for him.  He has an ID bracelet with his name and info on it, but the words have faded off (I just discovered the other day).  The locator bracelet will help should any great escape ever happen again.

I’m still working through some self-care that’s needed after a crisis like this, but it’s getting better. Depression is starting to lift again and the anxiety as well.  It just takes time.

I’m so thankful for all the prayers that went up by my online friends and family. Thankful mostly that the situation never took the Lord by surprise and he had everyone and everything in place to keep Evan safe and bring him home to me again.