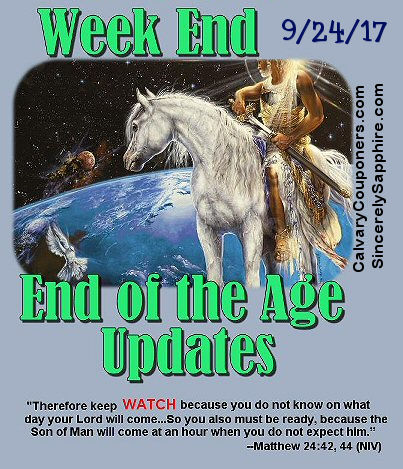 Hello everyone! Isn’t it great to get together with other believers like this and fellowship and share the Word together?  That’s what I like to think I’m doing as I write these posts every week.  Part of the dialogue we share together is comparing notes with what we’ve learned since the last time we were together. That’s especially true of those who have a great passion for Bible prophecy -the study of what is happening in the world and how it lines up with world events.  We compare notes and see what each other thinks. You agree up to now, correct? 🙂

I just say that to encourage you NOT TO SCOFF  at those who are watching and share that they suspect that a certain time period is a high-watch time.  None of the Bible prophecy teachers I follow dogmatically say that a certain day is definitely the day of the Rapture.  They’ve said that it’s strongly a high-watch period based on Biblical statements compared with things in the world.  That should tell us that they are serious watchers. Are you watching as closely as they’ve been?  I doubt if any of us are.

Now, of course if someone DOES say that Jesus absolutely IS coming back for His church on a certain date, do not listen to them. PRAY FOR THEM. Listen carefully to what they say.  If they seem puffed up and arrogant about it, I don’t listen to them nor will I share their messages here on my blog.  If they seem to be humble and seriously seeking and not dogmatically insisting on an exact date (not just a high -watch time), I respect them for the effort they’re putting in to watch and keep us informed.  They should be prayed for especially because the world and many many Christians are scoffing at them and slandering them with others.

DON’T YOU BE ONE OF THEM!  Pray for them! Love them, love ON them. Show them the love of Jesus.  They truly need it. Be wise and not arrogant. Don’t be all puffed up yourself!  I’ve had a handful of Facebook friends laughing and taunting these teachers and sharing memes full of images and words that make fun.  When I see that I think of the pharisees.  Don’t be one!  If you have been, please reconsider your actions and repent and be loving from now onward.

Be an ambassador for Jesus. Represent Him well because the world is watching!  The Bible tells us that they will know we are Christians by their love for one another.  Are they seeing love from you towards these watchers?  Think about it!

Please listen to the first part of Pastor J.D. about the September 23rd rapture watching. Thank you for your kindness, pastor J.D. So many believers are being so cruel to those who honestly thought it would happen. Be kind to each other, everyone!

Saudi foreign minister at UN: ‘No justification’ for Israeli-Palestinian conflict to continue

Israel Simulates War With Hezbollah, but Iran Will Orchestrate Next Conflict in Lebanon and Syria

Lebanese president: I won’t prevent Hezbollah from having weapons

Day After Reports of Israeli Attack: Syria Says It ‘Reserves Right to Respond’

Bahrain FM: We moved against Qatar over its support for terrorism

Trump: ‘Not much’ of a nuclear deal after Iran tests missile

Trump: North Korean leaders ‘won’t be around much longer’ if they strike US

US bombers, fighters buzz North Korea in show of force

Earthquake In North Korea Sets Off Alarm And Speculation

As Germany prepares to vote, the center holds, but the fringe is rising

Di Maio: the face of populists eyeing power in Italy

NFL union hits back at Trump over players’ right to protest

Dem calls for all NFL players to kneel during national anthem

Hillary Clinton: Women Who Support Trump Are ‘Publicly Disrespecting Themselves’

Living On The Moon May Happen By 2030, Scientists Claim

Six earthquakes reported in one day off Pacific Coast, west of Ferndale, CA

‘If anyone can hear us… help.’ Puerto Rico’s mayors describe widespread devastation from Hurricane Maria

Tropical Storm Lee could near hurricane strength by next week