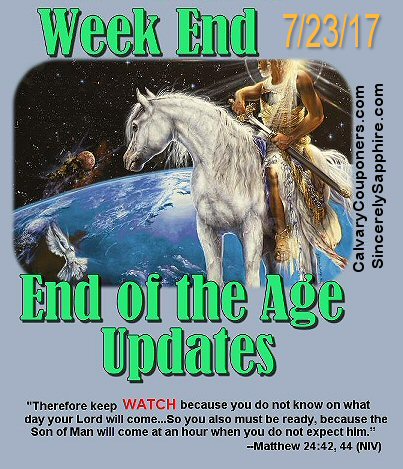 There is so much happening in the world today and I’ve found that there are many more sources than what I share here, but for time and space limitations this is what I offer us.  I hope you glean from it and are educated Biblically and for your world view as we see the events in the world unfold through the lens of Bible prophecy.

I’ve had several things weighing on my mind this week and occasionally I have to stop and remind myself that this too shall pass.  The big picture is unfolding all around us and the things of this world are “growing strangely dim” in the light of it all.

You can get Ken’s book discussed in the video here:

EU urges Israel, Jordan to cooperate on security in Jerusalem

Erdogan condemns Israel’s ‘excessive’ use of force in Jerusalem

Palestinians are leading themselves to a new ‘catastrophe,’ minister warns

Terror at Halamish: When a family’s Shabbat celebration turned into a bloody massacre

Netanyahu on Halamish killings: ‘An act of terror by a human animal filled with hatred’

Police clashes with rioters in several locations in east Jerusalem

How ISIS nearly stumbled on the ingredients for a ‘dirty bomb’

Tehran seeks release of detained Iranian citizens in US

In tweet storm, Trump decries ‘illegal leaks’ and asserts ‘all agree’ he has complete power to pardon

Could a war break out between India and China – again?

Why is the India-China border stand-off escalating?

The Meltdown in Venezuela’s Currency Is Deepening

Mexico’s bloody drug war is killing more people than ever

Mexico murders up with deadliest month in at least 20 years

Why ‘every person on the planet’ will need a digital ID

AIDS deaths are on the decline thanks to medications. But increasing drug resistance poses a danger

ABC, NBC under fire after smearing Christian organization as a “hate group”