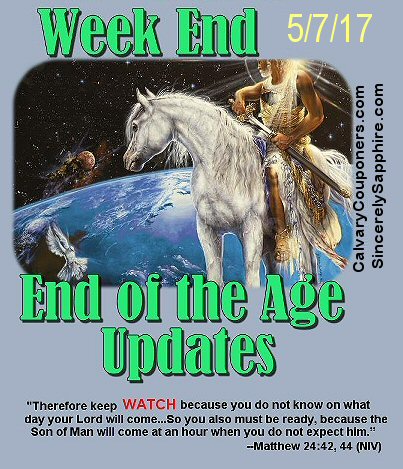 I hope you’ve all had a great week!  It’s been dreary and rainy this week here in north central Ohio, but a productive week nevertheless 🙂  I’ve begun spring cleaning pausing only for doctor’s appointments and after taking a tumble and falling after tripping over a box of my son’s books while carrying groceries in to the kitchen.  I was pretty sore till today, my arm is finally feeling better.  Regardless, I am blessed and able to take today, the Lord’s day, off to rest and  get this post for us uploaded and ready for us to glean from.  I hope you are challenged by these updates!

I couldn’t find a new video for this week, but here is an interview from 3 weeks ago with Glenn Beck that I missed so I’m sharing that for us this week 🙂

(I’m not finding a prophecy update video for this week)

US lawmakers urge recognition of Jerusalem births as in Israel

German president lands in Israel in wake of diplomatic spat

For the first time, Auschwitz guides taught to teach about Jews’ ‘spiritual resistance’

Deja Vu: Why Is Russia Back in Afghanistan?

In French election, voters face a choice that mirrors the West’s new divide

Moment of truth for the euro as France votes

Russia Sends Its Most Advanced Fighters to U.S. Coast

Atheist Bill Maher: ‘I Never Hear Anybody Go ‘Merry Christmas’ Before a Bomb Goes Off

In Venezuela’s Chaos, Elites Play a High-Stakes Game for Survival

Fight Brews Over Push to Shield Americans in Warrantless Surveillance