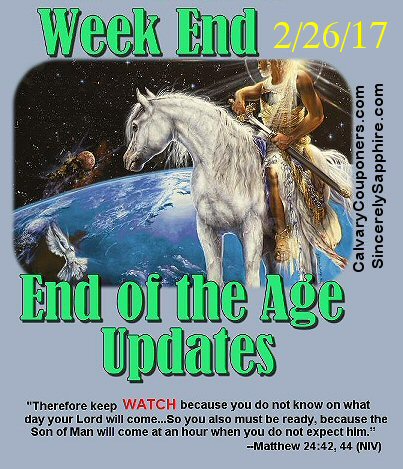 Hi everyone 🙂  I hope you are all well!

The blog was messed up this past week due to a glitch in the functions.php file, but I got it fixed today.  Please overlook the construction as I’m still getting the blog set up and situated.  I’m having an issue with the top images for each post showing up twice, so I’m trying to get to the bottom of that. Thanks for your patience 🙂

Here is the list of Bible Prophecy updates for this week. God bless you all <3

Netanyahu: We will never relinquish security control of West Bank

The Latest: IS fighters in Syria’s Homs target gas pipeline

Kurds offer land for independence in struggle to reshape Iraq

One dead after man drives into crowd in Germany, no sign of terrorism: authorities

Hillary Clinton Calls For ‘Resistance’: “We Need To Stay Engaged… I’ll Be With You Every Step Of The Way”

A Trump voter’s message to retailers: ‘Keep your mouths shut about our president’

Will the Wall Street Bubble Burst When Trump Reveals His Policies?

Most Americans Agree With Trump Not Obama on Transgender Bathroom Mandate

Transgender Model To Caitlyn Jenner: ‘We Do Not Need You To Save Us’

More than 900,000 Christians have been martyred in the last 10 years