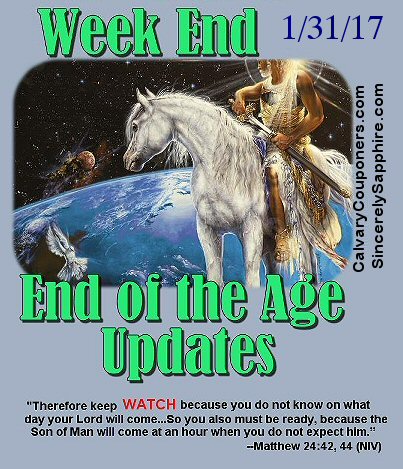 Hi everyone 🙂 I’m a few days late getting this up, but I ran into technical difficulties with my laptop.  I’m back and will catch things up to today’s date which finishes up the month of January (though I am posting this very early in the morning on January 31 so if anything big occurs today, that will be on this weekend’s update post).  If anything “big” occurs I hope it’s the Rapture calling us home, right? 🙂  We all should remember be watchful every single day because the way world events are happening it could be any day!

Joel was scheduled to be on CNN at 11:15 pm (about 2 hours ago) and I can’t find the video of it yet, so if I find the link soon I will update this page with that link.  You may want to search for it yourself in the meantime 🙂

You can get Michael Lake’s book, “The Sheeriyth Imperative” here:

Netanyahu to meet Trump at White House on February 15

Haneen Zoabi: ‘Israel is the only country not shocked by or afraid of Trump’

Abbas to Africa: Put Palestinian plight ahead of forging ties with Israel

Israel and Turkey to resume diplomatic dialogue after six years

The Muslim refugees converting to Christianity ‘to find safety’

Flashback: 26 Islamic Terrorist Attacks Plotted By Immigrants, Refugees In US

Amazon Is Working With Lawmakers to Counter Trump’s Immigration Order

No borders. No nations. No clue.

Obama rejects comparison between Trump’s immigration policy and his own, encourages protests

Why the Supreme Court fight is sure to go nuclear

Hackers Use New Tactic at Austrian Hotel: Locking the Doors

Robot Baristas Serve Up the Future of Coffee at Cafe X

Bogoslof volcano in the Aleutian Islands erupts to 10,000ft

More than 40 detained in Chile for spreading forest fires